Where was the cricket match in THE DEEP?

Cloche (Louis Gossett) and Treece (Robert Shaw) discussed raising the ampules from Goliath as they watched the Bermuda Cup Match at St. George's Cricket Club, 56 Wellington Slip Rd, St Georges GE 02, Bermuda. Most of the scene was filmed live amongst spectators at the real Bermuda Cup Match in 1976.
"Three days Treece ... three days". Much of The Deep was inspired by Bermuda's real underwater exploration history and there are discreet acknowledgments throughout the film. However, sometimes it's possible to read too much into a scene and assume there are Easter eggs that may just be random props with no deeper meaning. The St. George Cricket Club scene is an example of what might, or might not contain, Easter eggs which honour a 1961 experiment to search for shipwrecks using a giant balloon.
Before reading on you should watch this 3 minute clip of the scene and then return to continue.
In 1961 Don Schanche, editor of the Saturday Evening Post, visited Bermuda to sponsor Teddy Tucker's leadership of an underwater expedition. Referring to the expedition marine archaeologist Robert Marx credited Tucker with pioneering the use of a helium balloon to search for shipwrecks. Inventor Otto Winzen donated a plastic balloon that Tucker described as "candy-striped like a peppermint ball" and which towed an observer 180ft high above a boat.
The six week adventure included, Mendel Peterson, Peter Stackpole, Robert and Donald Canton (Edna Tucker's brothers), Edna Tucker, Major General Sir Julian Gascoigne, and astronaut Major Donald K 'Deke' Slayton. Peter Stackpole's photos from this adventure helped dress the 'Hamilton Library' scene earlier in the film.
Some of the participants were too heavy but Edna Tucker triumphantly took to the sky and in a 2004 interview for Teddy Tucker Adventure is my Life Edna described the balloon, with its trailing wind streamer, as "calypso pink!"

It was while using this balloon that the expedition discovered the wreck of the Virginia Merchant .
Fast forward 15 years and Romer Treece (Robert Shaw), a character Peter Benchley based largely on Teddy Tucker, is moving toward Henri Cloche (Louis Gossett) in the southwest corner of the St. George's Cricket Club.  If you watched the clip earlier did you notice the balloon fly past with its trailing streamer?
Notice the streamer isn't tied to the neck but has been attached to the side like the Winzen balloon. 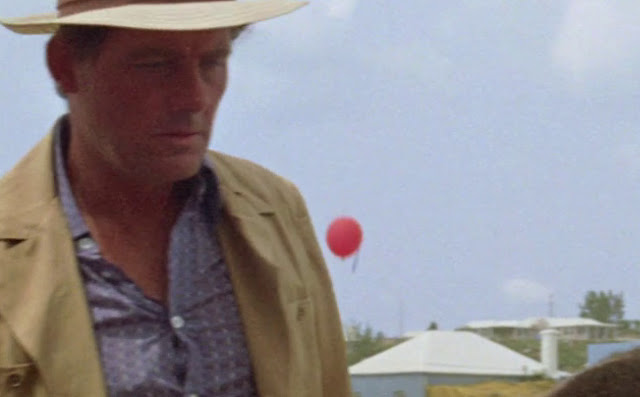 Did you see the massive candy-stripe in the breeze behind Louis Gossett?
Still not convinced? What about the voice yelling out "calypso"? The Deep soundtrack included the song Calypso Disco by Beckett, from producer Peter Guber's own Casablanca Record and FilmWorks, and the song plays from the beginning of the scene. As Treece moves toward Cloche, and while the balloon rises, the song's chorus repeats:
"Calypso disco
Calypso disco"
Play the clip again or listen to Beckett's original recording below.
Easter eggs, which are hidden props intended to surprise the viewer, usually have no relationship with the storyline and rely upon the phenomenon of inattentional blindness (and inattentional deafness) to stay concealed.
If these really were Easter eggs they were possibly recognised by an exclusive group whose gag has stayed well hidden for many decades.
The Bermuda Cup Match still takes place every year across Bermuda's two day Emancipation Day and Somers' Day public holidays.
Were you there when The Deep was being filmed? Share your story of the The Deep filming locations in the comments below.
thedeepfilminglocations(at)gmail.com
References
Bermuda Cup Match Cricket Otto Winzen Peter Stackpole Robert Marx Somerset St. George’s Teddy Tucker Tucker's Balloon