Get ready for a big day! Filmed in 1976 THE DEEP is still a great film which thrilled audiences around the world and showcased Bermuda to millions. One of the great benefits of holidaying in Bermuda is that the territory's 53.2 km² size makes everything close by. If you have a limited amount of time or want a unique journey from one end of Bermuda to the other then use this Google Map to explore 24 Bermuda filming locations from  THE DEEP  that you can see in one day. Some of the locations only appeared in the extended TV version of the film but they're still worth a visit for their natural or historical value. One of these is  Butts Beach  which featured Robert Shaw 's son Colin , as a young Romer Treece, and Eli Wallach 's son Peter , as a young shipwrecked Adam Coffin.  The sea gives up her dead in a deleted scene at Butts Beach , Bermuda (Source Sony Pictures ). THE DEEP 's cameras have preserved the appearance of some locations that have since been demolished
Post a Comment
Read more

Where was the lighthouse from THE DEEP filmed?

Where was the Moray eel from THE DEEP filmed? 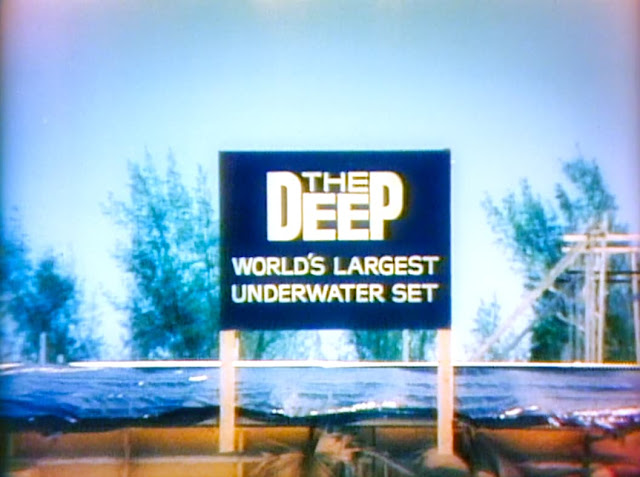 Almost all of the scenes inside the wreck of Goliath, including the eel, were filmed at the world's Biggest Underwater Set (BUS), a purpose built underwater soundstage at Ireland Island South, Bermuda. The location has no specific postal address but lies on top a hill once called "Hospital Island" behind a private home at 17 Malabar Rd, Sandys MA 01, Bermuda .  Most who pass the corner of Lagoon Road and Heydon Road never notice the crumbling narrow driveway that disappears into the forest. The entry seems to go nowhere and the old stone wall unfurls all the way down to the Great Sound. But this quiet hill has one of the most layered histories in all of Bermuda. Remnants of the past continue to reveal themselves including long gone traces of an important naval hospital and  THE DEEP  underwater soundstage. 1976 - The Deep BUS on the hill formerly known as Hospital Island with The Lagoon far right. The contemporary Hospital Island is in the foreground bottom of picture
Post a Comment
Read more
More posts