This post contains information about the real wreck of RMS Rhone, remembers The Deep's connection to Bert and Jackie Kilbride, to Peter Island Yacht Club (now Peter Island Resort), and shows 10 exact places on the wreck where The Deep was filmed.
RMS Rhone
RMS Rhone is a real wreck which sank 29 October 1867 after striking Black Rock Point, at Salt Island in the British Virgin Islands, during the San Narciso Hurricane.
The exact death toll remains uncertain because an unknown number of passengers from RMS Conway transferred to the "unsinkable" Rhone when both Rhone and Conway began to drag their anchors while moored at Peter Island.
It would be a disservice to skip over the dreadful events of Rhone's sinking and there are two good books which memorialise the disaster revealing the history of the ship, the lives of her passengers and crew, and the impact on the Salt Island community.
When Lionel J. Lee, Chief Officer of RMS Tyne, sketched the wreckage the following day, Rhone's stern section floated partially above the water on Black Rock Point. The bow had settled relatively upright with the forward mast above water.
Kent's Twice She Struck provides a vivid description from first-hand accounts of survivors climbing the foremast of the wrecked bow section as they tried to hold on against roaring seas. The scene was illustrated in a George Wilkinson watercolour which captures the moment Josiah Metcalfe, an invalided seaman, and others found sanctuary in Rhone's foremast.
The same mast and crow's nest that Josiah Metcalfe desperately climbed is still at the wreck site on the bow section.
Kent also corrects a myth about Rhone's wreckage being blown up by the British or US navies because it was shipping hazard. Instead, it was hardhat diver Jeremiah Murphy, who arrived in St. Thomas to help clear hurricane damaged Charlotte Amalie Harbour, who used explosives while salvaging the Rhone. Murphy's activities blew apart what remained of the Rhone's stern section which then obliterated slid off Black Rock Point. The bow section may have rolled onto the seabed during another hurricane in 1924.
In 1958 Bert Kilbride, the husband of Jacqueline Bisset's stunt double Jackie Kilbride, was possibly the first person to dive the Rhone since it's salvage during the late 1860s (Kent, 2017). The Kilbrides, who were friends of underwater cinematographer Stan Waterman, ran underwater tours of Rhone and Anegada from their home at Saba Island. To offset the loss of income to Kilbride's tour business, caused by The Deep having exclusive access to Rhone, producer Peter Guber hired Jackie Kilbride as Bisset's underwater stunt double. She also travelled to Marion Reef in Australia to play Gail Berke during shark scenes.
The Deep provided the Kilbrides with what was effectively a global promotion of their Rhone dive site which they capitalised upon by cross-promoting underwater tours alongside production teases by Columbia Pictures (now Sony Pictures) in diving magazines.
Rhone was suggested as a filming location by underwater cinematographer Stan Waterman because it offered a scale of shipwreck and consistent water clarity that could not be found in Bermuda. Waterman and Peter Benchley had been best friends for many years and it was Waterman who brought Al Giddings onto The Deep production team. A biopic on Waterman's career, Stan Waterman the Man who loves Sharks, from Greg Stirling, includes Peter Benchley and is available on Vimeo. 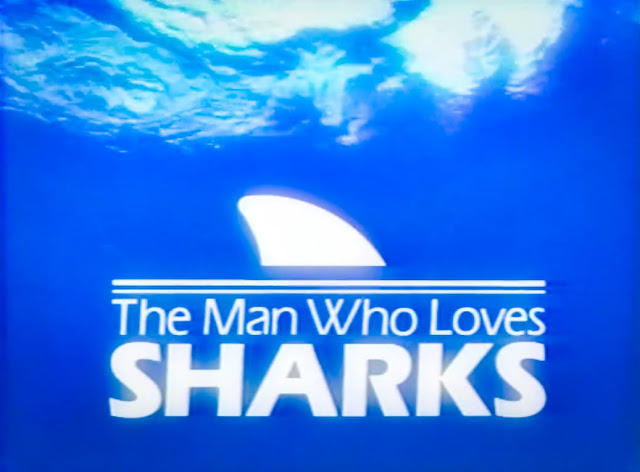 In the summer of 1976, when the Rhone's story had almost been forgotten, Peter Island Yacht Club (now called Peter Island Resort) became The Deep's production headquarters as exterior diving scenes were filmed at the Rhone. Cast and crew lived at the Club and one the sitting rooms was converted to the production office and temporary screening room.
Jacqueline Bisset came to The Deep as a novice diver following introductory lessons by Al Giddings who said, "She went from declaring she'd never put her head underwater, to staying down 40 minutes at a hit. The lady is incredible."(Daily News, 1976). By the end of production Bisset had accumulated many hours, with a few scares, and was aware of Rhone's history. Recalling getting lost in Rhone's hull "I began thinking of all the men who had died on that ship, and became absolutely terrified."(Daily News, 1976)
Each day the cast and crew commuted the few minutes from Peter Island to Rhone on board dive master Denny Breese's boat Tern. From Tern they transferred to the Moby II a utility boat stationed over the wreck site which was brought especially from Miami. While Peter Island did not feature in the film the Club was careful to associate itself with The Deep just as the Kilbrides had done in diving publications. However, Peter Island shrewdly included a Jacqueline Bisset lookalike, complete with scuba gear, in a series of evocative print advertisements.

RMS Rhone appears largely unchanged since The Deep was filmed in 1976 but Hurricane Irma caused part of the bow section to 'shape shift' downwards in 2017. It appears that swim throughs are still possible and the cargo hatch that Jacqueline Bisset blew a kiss from remains intact. The small Salt Island cemetery nearby, where many victims of the Rhone disaster were buried, was reportedly destroyed.
Use the dive charts below to find 10 key scenes filmed on the wreck of RMS Rhone.
1. Jacqueline Bisset blows a kiss to Nick Nolte from the cargo hatch on Rhone's bow section.
2. The aft end of the keel on the seaward side (near where "70FT" is marked on this chart) is where she was pulled under the hull, and,
3. Directly above the same site on the keel (near where "40FT" is marked on this chart) is where Bisset struggled to free herself from Nolte's grasp.
Bisset has said she almost drowned while filming this scene and Nolte also lost his air supply. 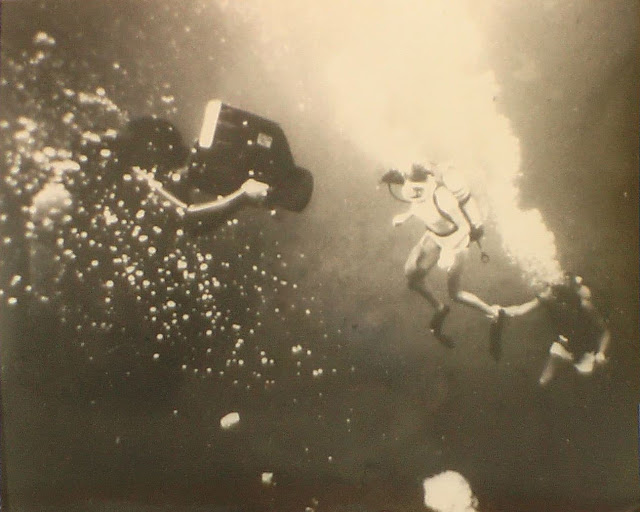 4. Nick Nolte plays with an octopus by the boiler at the mid section.
5. He discovers a fork inscribed GOLIATH and the bottle with the medallion by the tiles on the South section.
6. Bisset feeds fish at the gearbox on the stern section.
7. The couple take photos while swimming along the aft mast opposite the gear box on the stern section.
8. The couple approach the propellor swim-through beneath Black Rock.
9. Treece, David and Gail go up in the column of bubbles from the hatch lying in the sand on the seaward side of the bow section.
The bubbles scene was inspired by a real event that occurred when Peter Benchley, his wife Wendy, and son Clayton, inadvertently descended into a shark feeding area and found themselves surrounded by 13 hungry sharks. As the sharks became agitated the trio purged their regulators to shield themselves with a noisy curtain of air and slowly ascended to the safety of their dive boat. Benchley recalls the harrowing experience in his book Shark Trouble.
10. Rhone's real interior appears briefly when Gail Berke (Jacqueline Bisset), Romer Treece (Robert Shaw), and David Sanders (Nick Nolte), pull air hoses through the cargo hatch in the bow section (see number 1 in this list). Gail (stunt double Jackie Kilbride) swims through the bow section to send ampules topside.
All other wreck interior scenes were filmed inside the world's Biggest Underwater Set (BUS) in Bermuda.
If you are lucky enough to visit the Turks and Caicos Islands you'll discover that Jeremiah Murphy gifted Rhone's bell to St. George Anglican Church, Cockburn Harbour TKCA 1ZZ, Turks & Caicos Islands where it still rings today. Murphy and members of his family are buried in the churchyard outside.
Rhone's remains have survived to bridge three centuries unlike the ship's owner Royal Mail Steam Packet Company which is no more.  In 1965, after changing ownership a number of times in the twentieth century, the company was absorbed into Furness, Withy & Co who once operated the Furness Bermuda Line. A discrete acknowledgement of Furness' dual connection to both Rhone and Bermuda appears in The Deep's Hamilton Library scene. When Bermuda's Maritime Museum opened in 1974 one exhibit was a house flag of Furness Withy & Co which hung high above the doorway at the east entrance of the Queen's Exhibition Hall.

As Nick Nolte took his seat opposite Jacqueline Bisset in 1976 the Furness flag could still be seen high above the doorway.
Were you there when The Deep was being filmed? Share your story of the The Deep filming locations in the comments below.
thedeepfilminglocations(at)gmail.com
References
British Virgin Islands Jackie Kilbride Jacqueline Bisset Nick Nolte Peter Benchley Peter Island Resort Peter Island yacht Club. RMS Rhone Robert Shaw Salt Island Stan Waterman