Where was the 'Hamilton Library' in THE DEEP?

THE DEEP's 'Hamilton Library' scene was filmed inside the Queen's Exhibition Hall at the National Museum of Bermuda, 1 The Keep, Sandys MA 01, Bermuda.

There really is a Bermuda National Library in Hamilton, Bermuda, but THE DEEP made their 'Hamilton Library' inside the Queen's Exhibition Hall. Two 'Hamilton Library' scenes were filmed but only one appears in the final cut of the film. That scene opens with David (Nick Nolte) looking over 'Treece's Treasure' while Gail (Jacqueline Bisset) tries to identify the mysterious medallion from the wreck of the Goliath.

The deleted scene appears in the extended TV version and includes Eli Wallach's wife Anne Jackson as the librarian who directs David and Gail to St. David's Island.

However, the year before filming began, the location was a real life crime scene where Teddy Tucker discovered that the Tucker Cross had been stolen. Just before Queen Elizabeth II arrived to officially open the Maritime Museum, and to view the Tucker Treasure, Tucker himself discovered that the cross had been swapped with a fake. Other pieces of the collection went on display and the Bermuda Recorder published a photo of the Queen and Teddy Tucker at the scene.

In October the following year, when THE DEEP's production designers created the 'Hamilton Library', they left many of the Maritime Museum's real exhibits in place. But Tucker's Treasure became 'Treece's Treasure' and the crime scene from the year before hid images of Teddy Tucker in plain sight.

One prop photo shows Teddy diving on the wreck of Pollockshields.

Life Magazine photographer Peter Stackpole took the picture in the 1960s while documenting the work of Bermuda's underwater explorers. Stackpole's actual photo and many others can be enjoyed at Life's image archive.

The Pollockshields is one of many real shipwrecks that inspired THE DEEP's fictional Goliath and is alluded to when Slake (Dick Anthony Williams) warns David and Gail "Goliath's full of munitions — tourists aren't allowed to blow themselves up you know." When Pollockshields wrecked off Elbow Beach in 1915 the ship was carrying 350 tonnes of munitions that were still washing up at Coral Beach and Tennis Club in 2010. Pollockshields' steering wheel graced the entrance to the Zuill family estate of Orange Grove in Smiths Parish. 'Orange Grove' was the inspiration for the fictitious Orange Grove Hotel where David and Gail stayed in Bermuda. Peter Benchley was a guest of the Zuill family (treated to Mrs Zuill's famous cassava pie) when he visited Bermuda for National Geographic in 1970.

Today you'll find the red-framed Robert Steinhoff Family Gallery behind exactly where Jacqueline Bisset said "OPN means Ora Pro Nobis, pray for us, and SC I can't find in any of these".

THE DEEP author Peter Benchley first visited Bermuda in 1970 because National Geographic sent him to tell the story of Bermuda through its shipwrecks. It was on that assignment that Benchley first met Teddy Tucker who became a lifelong friend and was the inspiration for the character of Romer Treece. An acknowledgement of National Geographic's connection appears as the large galleon painting behind Jacqueline Bisset.

The painting of Atocha at Havana Harbor by Noel Sickles was published in the June 1976 National Geographic story The Trouble with Treasure by Dr. Eugene Lyon. 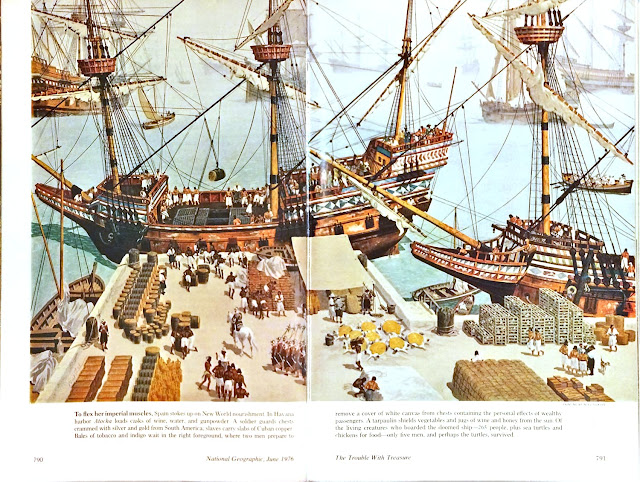 According to Emory Kristof, the photographer who accompanied Peter Benchley to bermuda for National Geographic:

"We went out catching sharks on long-lines. Benchley was a smart one. While I was taking pictures, he listened to all of Tucker's yarns about sharks and shipwrecks and turned it into Jaws and then made The Deep."

Further acknowledgement to National Geographic can be seen in the meticulous set dressing of Treece's Lighthouse.

The 'Hamilton Library' scene is also significant because it captured the appearance of the new Maritime Museum at its genesis. Dr. Jack Arnell, one of the Museum's founders, was a background extra who wandered between exhibits. A lady wearing a striking emerald dress looks remarkably like Teddy Tucker's wife Edna Tucker who helped discover the Tucker Cross.

Edna frequently went wreck hunting with Teddy and in an apparent reenactment of the Tucker Cross discovery, filmed in 1961, Edna was at the dive site when the Cross was brought to the surface. Edna was also at the Queen's Exhibition Hall when Teddy discovered the Cross was missing.

This is how the Queen's Exhibition Hall looked during filming compared to now.

The Queen's Exhibition Hall is also called the 1850 Ordnance House, and the Maritime Museum, which was established in 1974, grew into the National Museum of Bermuda.

If you visit there are other locations within walking distance nearby. THE DEEP's production offices were inside what is now the Clocktower Tower Shopping Mall and the soundstages for Treece's Lighthouse and the Orange Grove Hotel were once inside a Sail Loft behind the Clocktower Mall.

Were you there when THE DEEP was being filmed? Share your story of the THE DEEP filming locations in the comments below.
thedeepfilminglocations(at)gmail.com
References
Anne Jackson Bermuda National Library Dick Anthony Williams Goliath Jacqueline Bisset National Museum of Bermuda Nick Nolte Peter Benchley Peter Stackpole Pollockshields Teddy Tucker Tucker Cross