Where was Jacqueline Bisset kidnapped in THE DEEP?

THE DEEP mobylette chase, that ended with Jacqueline Bisset (as Gail Berke) being kidnapped, was filmed at 10 unconnected Bermuda locations which, when edited together, gave the impression of a linear journey. Learn more about the unique history of each place and navigate your way using the map below.

The pursuit started on the Bermuda Causeway  at Longbird Bridge with an establishing shot looking west toward Grotto Bay.

If Gail Berke (Jacqueline Bisset) and David Sanders (Nick Nolte) had left the real St. David's Island, they would be travelling west but their mopeds are filmed travelling east in the opposite direction. This is the correct direction of travel for characters coming from the St. David's Lighthouse set at Coney Island. The Coney Island set can be seen in the distance after the Commer truck pulls out from behind the old guard house.
When Bisset, Nolte, and the Commer drove out of shot they would have passed over Longbird Bridge, named after Long Bird Island which was levelled in 1941 to build Kindley Field. When THE DEEP was filmed in 1976 Longbird Bridge still existed (demolished 2020), but in 2003, Hurricane Fabian caused significant damage to The Causeway precisely on this spot. The part of the road Bisset and Nolte rode across disappeared into the ocean. 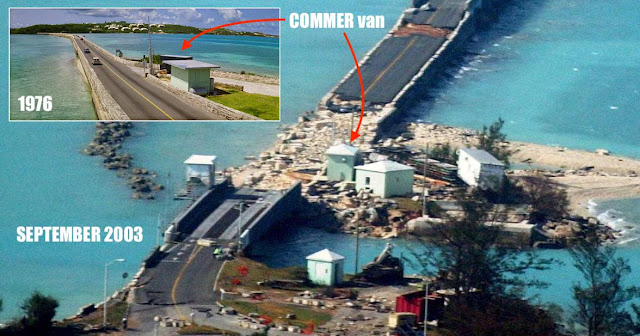 At Bailey's Bay the couple turns right, off North Shore Road, into Fractious Street, and they're soon joined by the truck.
As Bisset and Nolte turned off North Shore Road it was possible to see the concrete remains of the Bermuda Railway which is now the Bermuda Railway Trail. Thanks to the Friends of Bermuda Railway the pylons that once carried trains the length of Bermuda now support the popular Bailey's Bay Walkway (or Footbridge). Standing on the walkway it's possible to look up the Fractious Street rise where Bisset and Nolte rode.
As the couple continued up Fractious Street the location cut to Trinity Church Road alongside Harrington Sound. In the extended TV version of THE DEEP there was a long shot east from 43 Trinity Church Road, Hamilton looking toward the intersection of Trinity Church Road, Wilkinson Avenue and Harrington Sound Road.
The characters barely missed some workmen as they passed outside 27 Trinity Church Road, Hamilton.
Approximately 100 metres further west the couple skids around the front of Holy Trinity Church.
This church is considered the oldest existing church in Bermuda, so old that its roof was originally covered with palmetto fronds.
The location cuts to Langton Hill which can be confused with Blackwatch Pass due to the similar appearance of the high coral walls. Gail manages to avoid being crushed into the coral wall by turning left into Langton Lane.
In the film version of THE DEEP the scene at Langton Lane cut straight to the couple's arrival at Cloche's hideout but in the extended TV version the journey takes a longer ride past some Bermuda landmarks. The first of these is Flatt's Village where the taxi drives down Flatt's Bridge having passing the Bermuda Aquarium, Museum and Zoo which is out of shot to the right. The Aquarium is linked to the 1975 theft of the Tucker Cross and it was there that Police discovered the key to the safe that stored the cross was kept in an unlocked cabinet.
The extended TV version continues the journey up North Street and pauses by a busy church before arriving at Cloche's.
Cloche's hideout was across the road from historic Pembroke Sunday School at 3 Angle Street, Hamilton.
The school began in 1819, at a time when there were few schools in Bermuda, and provided “reading, writing, spelling and the Catechism . . . and a reverence for holy things.” (Zuill, 1946). The present church was built in 1882 and has been called "The Centre" or more recently "Sammy Wilson Central Zone Community Centre".
Although Cloche's hideout has been demolished, and another building stands in its place, the entry that Bisset and Nolte were dragged into can be seen in a 1973 aerial picture.

Cloche's hideout was only a 5 minute walk from Goslings Head Office, at 9 Dundonald Street, Hamilton, the home of Black Seal Rum seen throughout the film.

Goslings retail store is at 33 Front St, Hamilton (corner of Queen Street and Front Street). In the extended TV version of THE DEEP Gail and David ride their Mobylettes the length of Front Street on their way to Treece's Lighthouse.

Were you there when THE DEEP was being filmed? Share your story of the THE DEEP filming locations in the comments below.
thedeepfilminglocations(at)gmail.com
References
Bermuda Aquarium Bermuda Causeway Black Seal Rum Flatt's Village Goslings Jacqueline Bisset Kidnap Langton Lane Longbird Bridge Museum and Zoo Nick Nolte