What real ships inspired THE DEEP? 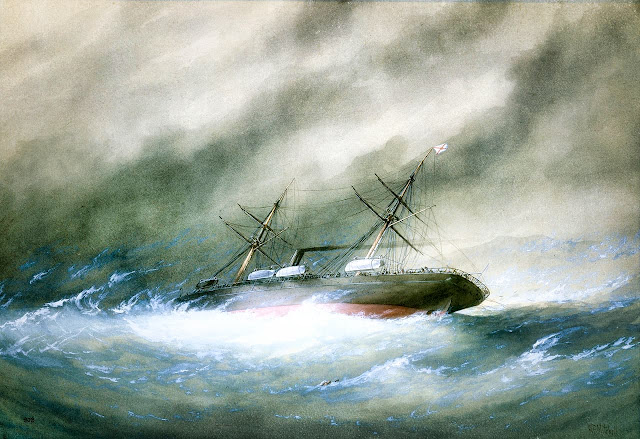 THE DEEP is inspired by numerous real shipwrecks that author Peter Benchley became aware of after meeting Bermudian explorer Teddy Tucker. Tucker was himself the inspiration for the character of Romer Treece, and first meet Benchley when National Geographic sent the Jaws author to Bermuda in 1970*. Benchley's brief was to tell the story of Bermuda through its shipwrecks and according to Emory Kristof, the National Geographic photographer who accompanied Benchley:

"We went out catching sharks on long-lines. Benchley was a smart one. While I was taking pictures, he listened to all of Tucker's yarns about sharks and shipwrecks and turned it into Jaws and then made The Deep."

There's no indication that RMS Rhone, the filming location for Goliath's exterior scenes, inspired any part of Peter Benchley's novel. See exactly where on Rhone Jacqueline Bisset was filmed in this special post.
The Deep Filming Locations recommends Bermuda Shipwrecks by Daniel and Denise Berg, with a forward by Teddy Tucker, for a concise history of Bermuda's wrecks.
*Peter Benchley was reported to have said he visited Bermuda in "In 1970 or ’71" but in The Making of The Deep he said 1969. Regardless, Benchley's National Geographic story appeared in July 1971.
** Different sources say the wreck sank in different years. Berg says 1942 (Berg, 1991); University of California San Diego says 1943.
*** Different sources date the wreck of the San Pedro between 1595 -1598. In a 2010 video interview Teddy Tucker, who discovered the wreck in 1951, said it sank in 1598. See Teddy Tucker Adventure is My Life.
Were you there when The Deep was being filmed? Share your story of the The Deep filming locations in the comments below.
thedeepfilminglocations(at)gmail.com
References
Bermuda Capitana Constellation Goliath Grifon Lartington Madiana Marvel Montana Pollockshields RMS Rhone San Pedro The Brigadier Western Blue Cut Reef

Rapture of THE DEEP; Jacqueline Bisset's famous wet t-shirt as film marketing strategy; how it happened and where it was filmed.

A photo allegedly taken by a National Geographic photographer , of  Jacqueline Bisset  scuba diving in a white t-shirt, pioneered viral marketing in film when it was controversially published without Bisset's knowledge and her required consent had already been refused.  As opening day of The Deep  approached, the photo, and the circumstances surrounding its release, caused a surge in publicity that became a film marketing sensation.  Jacqueline Bisset pioneers viral marketing in film  (Source unknown possibly  David Doubilet )  The Deep 's potential commercial partners had been promised that over 200 million people would have " read, seen or heard " about the film at least 15 times before opening day 17 June 1977. " THE DEEP campaign began a year ago " and targeted " everyone in America ".    "By June 16th over 200 million people will have read, seen or heard about THE DEEP ..." "THE DEEP campaign began a year ago" "The Tot
Read more

Where was the lighthouse from THE DEEP?

Discover the real wreck of  RMS Rhone ,  in the British Virgin Islands, which was a filming location for  The Deep 's fictitious Goliath . The location is also connected to BVI's diving pioneers,  Bert and  Jackie Kilbride , and to Peter Island Yacht Club (now Peter Island Resort). The 10 exact places on Rhone where  The Deep was filmed are revealed below.  RMS Rhone (Source Illustrated London News) RMS Rhone is a real wreck which sank 29 October 1867 after striking  Black Rock Point , at Salt Island in the British Virgin Islands,  during the  San Narciso Hurricane .  The exact death toll remains uncertain because an unknown number of passengers from  RMS Conway   transferred to the "unsinkable" Rhone when both Rhone and Conway  began to drag their anchors while moored at Peter Island.  Conway featured on a 1985 Belize stamp commemorating the 350th anniversary of the British Post Office. It would be a disservice to skip over the dreadful events of Rhone 's si
Read more